Please find two sections of information below: GENERAL INFORMATION and I’M NEW.
If you don’t find what you’re looking for, feel free to CONTACT US. 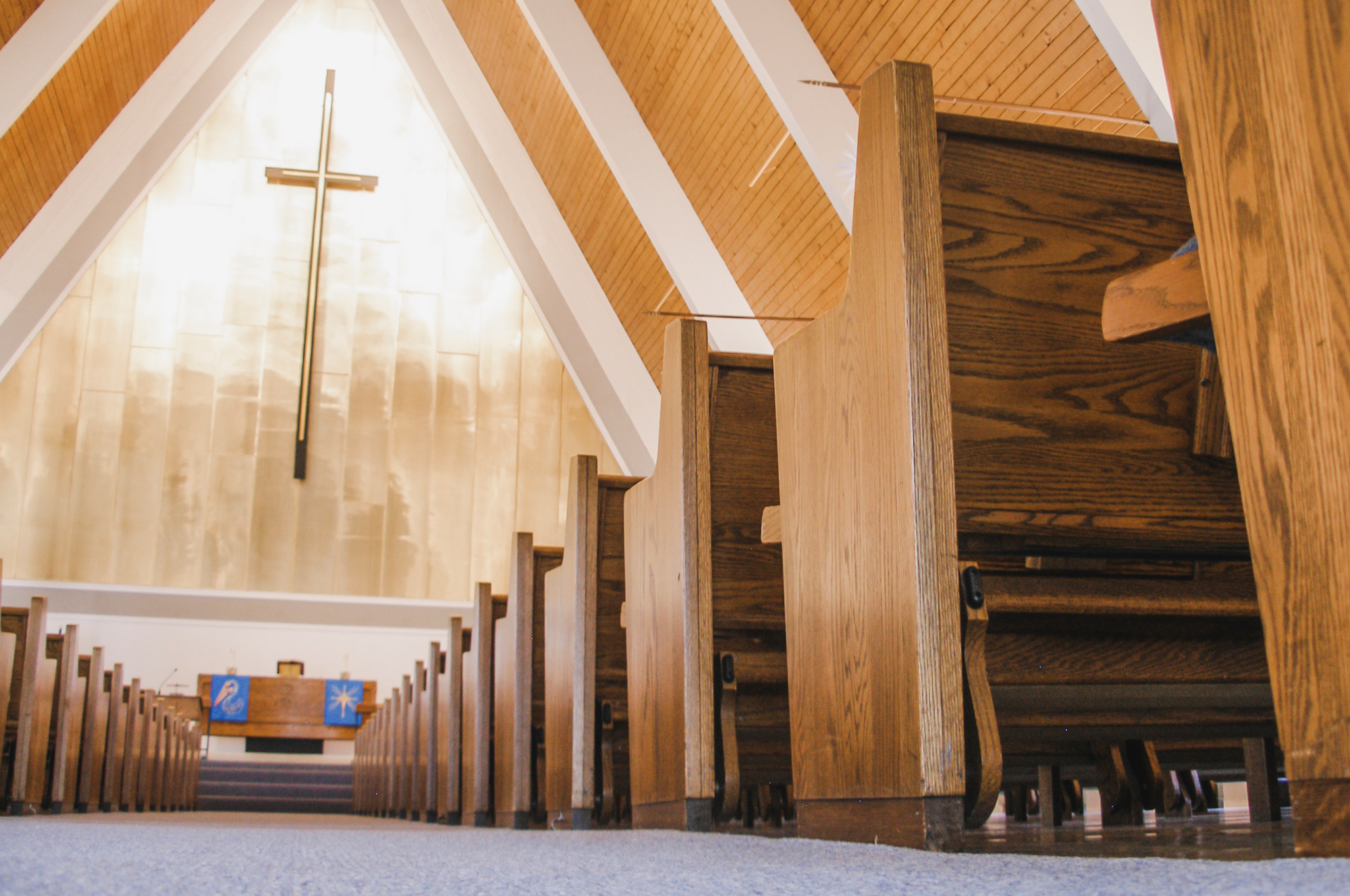 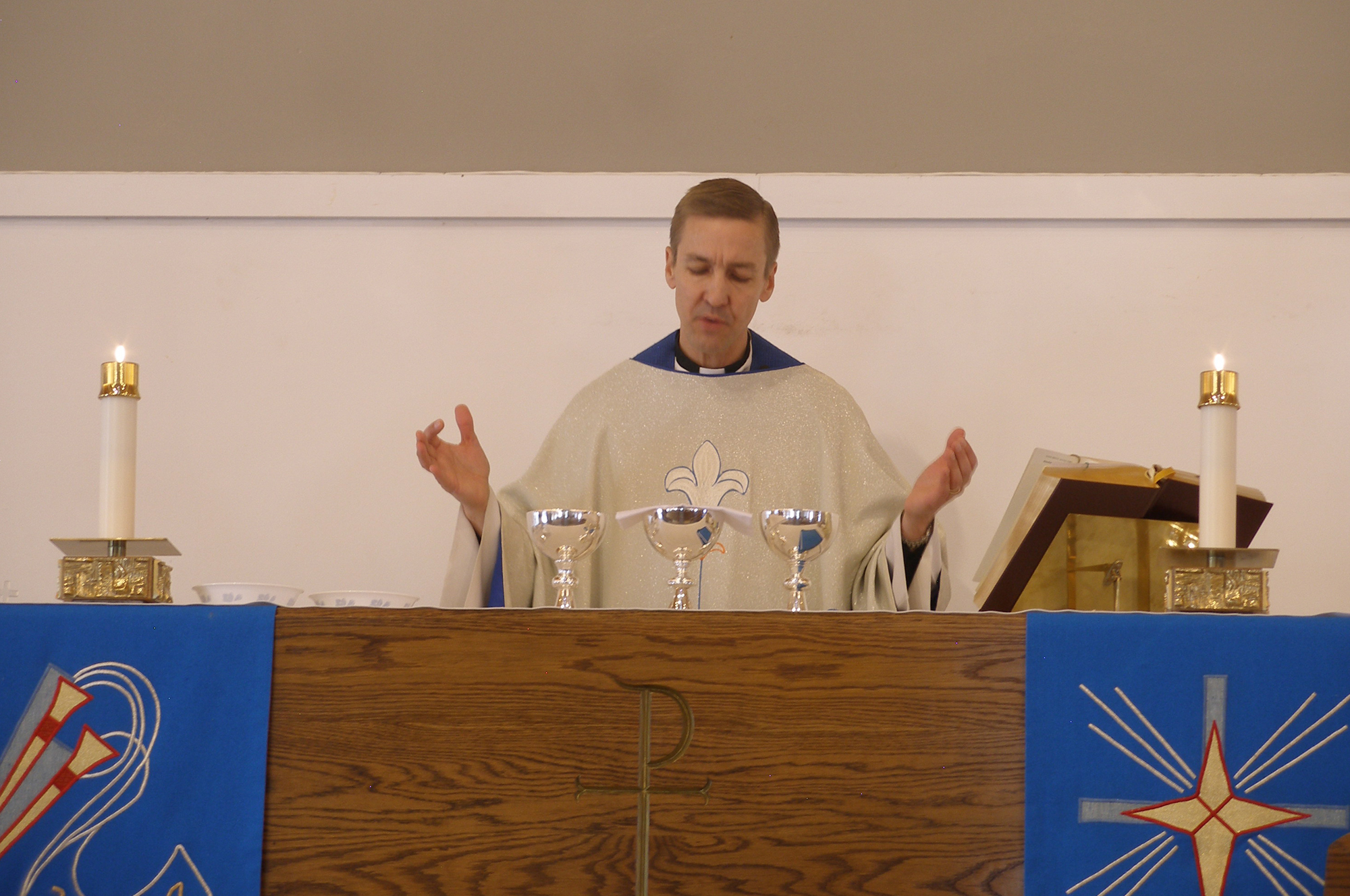 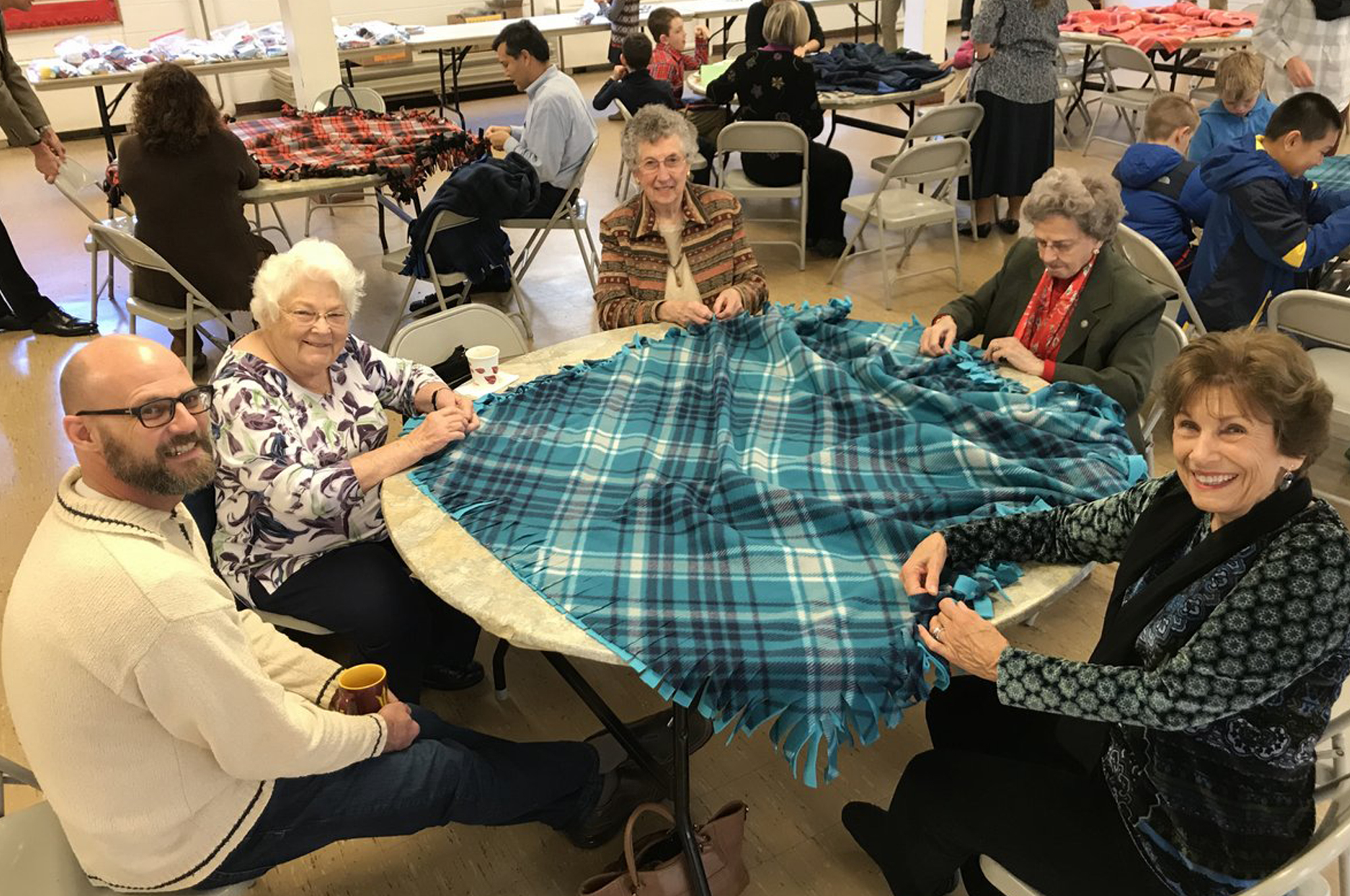 “For where two or three gather in my name, there am I with them.”

St. Paul’s seeks to be a warm, active and Christ-centered church that is faithful to the Word of God and welcoming to all.

Pictured at left is our Main Entrance.  It can be accessed from the parking lot behind the church building.  Those visiting the church during office hours (Mon. – Fri., 8:30am – 2:30pm) are asked to use this entrance.  Those attending services on Sundays or other days can also use the Sanctuary Entrance at the front.

We hope you will join us for worship and activities.  We’d love to get to know you!  May God’s peace and blessing be yours.

St. Paul’s Lutheran Church (St. Paul’s) is a family of Christian believers walking, working and growing together under the direction of our Lord and Savior, Jesus Christ. Our name comes from the Biblical evangelist Saint Paul and the great reformer Martin Luther. Our Mission Statement is: “We share the life-changing Good News of God’s love for all people in Jesus Christ.”

St. Paul’s worships and gathers in two languages: English and Mandarin Chinese. We are very committed to the ministry of our Christian preschool. We seek to be a multi-generational and ethnically-diverse congregation reflecting the face of our community. We place a high value on our congregation’s preaching, teaching and worship ministries and we lift up the message of the cross, remembering that Saint Paul said: “We preach Christ crucified” (1 Corinthians 1:23).

Learn more about our preschool program.

Giving offerings to God is an act of worship. Through our vocations we each give daily offerings of our time and talents to help others. As Luther famously said, “The maid who sweeps her kitchen is doing the will of God just as much as the monk who prays—not because she may sing a Christian hymn as she sweeps but because God loves clean floors.”

Yet there is also a time to bring an offering to the house of the Lord. The Church collects these offerings and uses them to proclaim God’s love through word and deed.

The financial offerings given to St. Paul’s provide for the upkeep of the facilities, the salaries of staff, supplies for our programs, hospitality during events and at least 10% given to mission needs of the greater church and community.  We issue envelopes with numbers to those who will be giving monetary offerings regularly so that contributions may be recorded for tax purposes. Those wishing to have their offerings withdrawn automatically from a checking or savings account are welcome to speak with our church office to make that arrangement.  One-time gifts are also certainly welcomed.

If you are interested in offering your time and talent to the congregation and its work, see the Adults and Families page for service opportunities.

Simply put: we believe in Jesus Christ as Lord and Savior.

This understanding comes from the Holy Scriptures. Our constitution says: “This congregation holds all the canonical books of the Old and New Testaments to be the inspired Word of God and the sole rule of faith and life.”

St. Paul’s beliefs can be described as Bible-based, Christ-centered, Sacramental and Confessional. For a more detailed description of what this means to us, please click here.

We’re glad you’re here! And we look forward to meeting you. Whether you’re new to the area and looking for a church, a neighbor who’s interested in one of our programs or events, or simply curious about what is done at this place – the people of St. Paul’s want to be helpful and welcoming. Look around this site… and then come for a visit or contact us to connect. We would love to work, pray and grow together with you.

When you come to St. Paul’s, you can expect to find loving and caring people enthusiastically offering praise to God, earnestly praying for His help, and eagerly learning how His Word can help them grow in faith and wisdom. That being said, please don’t expect that the people here will always live up to this ideal. We are a people with the highest of goals and standards, but we all fall short of them. We accept this while striving to do better.

At St. Paul’s, you can expect to find a church that reflects both its community and its Lutheran heritage. Our history and traditions are important to us even as we explore new ways of expressing the faith. Most of us like to dress up for worship, but we don’t make it a rule. We strive to know and use the content of our hymnal in worship, but we also use resources beyond it.

You can expect that our office will be open and available to you from 8:30 a.m. to 2:30 p.m. on Monday through Friday, and that if you write us a note or leave us a voicemail message we will get back to you quickly.

You can expect that a pastor will visit with you if you make an appointment and that you will be welcomed at all worship services and activities regardless of whether you are a member or not.  You can expect that if you leave your contact information we will follow up with you and seek to encourage you in your faith.

You can expect that the Word of God will inform all that we do and say.

Everyone is welcome to attend our worship services. We love having children in worship, but also provide a staffed nursery (at the 9:30 and 11:00 services) for children 3 and under if needed.

The weekly assembly of God’s people at St. Paul’s keeps with the rich heritage of liturgy and hymns in the Lutheran Church. Our roots date back to the early centuries of the Church and the time of the Reformation. This does not mean, however, that we are stuck in the past. We feel the Church has a responsibility to be contemporary and relevant. We build on the traditions of the past. We seek to be a liturgical church in the best sense of that word, following the ancient liturgy with the best of contemporary settings. We recall that the liturgy of the Church shapes us, moves us and unites us with Christians throughout time.

We believe that the meal of Holy Communion is for baptized Christians who have been taught the faith, examined themselves—admitting their need for forgiveness—and share with us in confession of faith. In this Supper, Jesus gives us his true body and blood for the forgiveness of sins and the strengthening of faith.

In Christian worship God comes to us—in Christ who is present among his gathered people and in the Spirit poured out through Word and Sacrament. At St. Paul’s, we try our best to worship God in a way that befits His holiness. We have been blessed with a worship space that is both beautiful and functional, and we seek to bring the best of our attention, our talents and our offerings to the Lord.

The Holy Scriptures implore us to seek unity together in faith, that we might be “fellow citizens with God’s people and members of God’s household” (Ephesians 2:19). We are not meant to walk the path of faith alone.

Becoming a member is a good way to publicly confess Christ and make a commitment of encouragement and support to St. Paul’s ministries, teachings and congregation. Members of St. Paul’s can vote in congregational decisions and be elected to a church office.  Maintaining active membership in the church signals that you are prepared to receive communion at the Lord’s Altar.

The requirements for membership are Baptism and Confirmation.  Baptized children who are not yet eligible for Confirmation and are under the care of their member parent(s) will be seen as non-Confirmed members.

Those desiring Baptism, Confirmation and/or Membership at St. Paul’s should make an appointment with one of the pastors.  See links below for more information about our Youth and Adult Confirmation classes.

St. Paul’s was formed in the early 1950′s by Christians who saw the need for a Lutheran congregation in the rapidly expanding Falls Church area. In 1953 it became incorporated as a member congregation of the Lutheran Church-Missouri Synod and built its first structure at the quiet suburban intersection of Leesburg Pike and Idylwood Road.

In 1962 St. Paul’s built its current sanctuary up the hill on Idylwood Rd, adding an Education Building a few years later. In the summer of 2014, a major addition was completed that joined these buildings together and added important gathering space and accessibility.

In its many years of operation, St. Paul’s has been served by three Senior Pastors, two other called pastors, a number of chaplains and assistants and seventeen vicars (interns), as well as organists, youth and education workers, preschool directors and many other part-time staff. It has helped to start a number of area mission churches. Its preschool was started in 1993 and Chinese ministry in 2001. For many years, St. Paul’s housed the local offices of Lutheran Social Services.

St. Paul’s members have served the community in the sectors of government, military, medicine, law, business, education and service. Through their dedication, witness and prayers they have made a positive impact on Fairfax County and the Washington region in countless ways. We give thanks for all who have been a part of the church, saying with the Psalmist: “The Lord is good and His love endures forever; His faithfulness endures through all generations.” (Psalm 100:5).